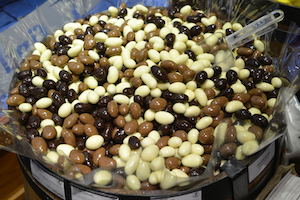 In [1] I confronted the question: How could we possibly have been using photographic emulsions in physics for the last 120 or so years and missed the critical observation that particle tracks appear when the emulsion is subjected to a uniform exposure to light?

I went over the concept that the particle tracks are actually a weak effect and could easily be mistaken for some type of defect or problem with the emulsion. I cited Lochak [2] writing about Ivoilov's LENR work:

...Ivoilov noted on the photographic plates myriads of microscopic tracks that did not draw attention at first glance, as they looked as small defects of the surface. On closer inspection, however, it turned out that the microscopic tracks were not simple defects.

Later I gathered a few instances of people working with photographic emulsions who may have inadvertantly captured these particle tracks and had characterized them as defects or problems.

But this approach of telling the difference between a defect and an actual particle track was not really satisfying.

More recently after constraining the exposure time to under 120 seconds, I started to think of this more as a volume element detector, temporarily bathed in a gas of photons as providing amplification to the detector. It is a nice model, but does it tell us why we missed the tracks? Perhaps it points us in the right direction as we consider the the exposure time [3] limited to 120 seconds, we begin to imagine that the detector (or detector condition) itself is the emulsion + light.

The most satisfying explanation is very simple. There never were any studies on the microscopic scale on the response of photographic emulsions to uniform exposures to light. Please let me know in the comments if you know of any.

This also brings up the question: What is the source of these tracks? This topic will be considered in the future.

[3] We assume that the emulsion is turned on when the photons first hit the film.